Skudden: The Mystery of Ralf

This is a blog post to vent some of my thoughts about this "new old" colour that Skudde sheep seem to have. It is slightly....nerdish but... there are pictures of sheep for all those people who don't get excited about sheep colour genetics!!

It's in english so I can easily share these thoughts with people who know much more about this than I do in the hope that they come up with ideas to explain the mystery of Ralf. And it assumes that readers have a basic knowledge of sheep colour genetics.
"The mystery of Ralf" is all about a sheep colour that I came to think of as "grouflon" because they look a bit like the grey mouflons that Adalsteinson  described. (Postulating the existance of an allel that combines components of "grey" Ag and "mouflon" At.).
There are examples of what we see in a previous blog post. I've been collecting pictures and pedigree information of quite a few grouflon Skudde. Well, explaining this colour seemed easy, seemed complicated, seemed impossible, easy again, impossible again....


What I know:
1. There is grey in the breed that is similar to other breed's grey. Lambs are born black with a few telltale white hairs at the mouth and inside ears. They quickly grow lighter at the mouth and eyes and the wool turns to a mixture of white and black hairs, giving the impression of grey.
The "new colour" looks similar in an adult but starts out differently: Lambs look a bit like "wild sheep". There is phaeomelanin on legs, ears, sides. Some of the hairs are typical agouti - "banded" like in a wild rabbit. As adults they tend to have more phaeomelanin than "ordinary grey" Skudde sheep. Especially on the legs. Sometimes there is a "pattern" on the face. (When I write "grey" I refer to the pattern - regardless of base colour. So grey includes fawn sheep)

2. There is a "popular sire" who is the ancestor of most of the grouflons. Ralf.


He is not the ancestor of all them! There are two more rams (TC, base colour brown) and a "grey" (black based) ram. Plus two ewes. None of these four animals seems to be related to Ralf. Three of them are not from registered flocks so we don't have information from way back... There might be a connection somewhere....


3. There is a dark and a light phenotype in the adults. Ralf is an example of the dark adult type.
I can't find a good picture right now but this ewe is an example of the light type. Looks like pure phaeomelanin in a lot of the animals but I'm not sure that's true for all (this one included). Skudde sheep can be brown based or black based which will affect the perception of "light" and "dark"

4. I see a difference in the adults that might have something to do with this. Regardless of basecolour. If you compare Ralf and TC and try to ignore that one is black based and one brown based, Ralf seems much "clearer" in colour. As does the ewe in the picture above. A bit like the colour on their faces has been "blurred" or "smudged" with photoshop.....But they have a "quality" of colour that made me think of "dilute". I couldn't find references for dilute in sheep but I found the opposite! Great thanks to Roger Lundie who mentioned it yesterday. After re-reading some of his excellent work I started to think "dark modifier" instead of dilute. "Modifiers" are usually wild-cards that people talk about when they can't make things work out but this one has been shown to exists. Whatever it is....
This modifier has been shown for Gotlands and Gutefar and Romanovs. I can easily see a connection between Romanovs and Skudde. One being from north west Russia, the other from east Poland. Plus: Romanovs are aseasonal and were used to improve "fertility" in other breeds. Skudde and Romanovs are the only aseasonal northern short tailed breeds that I know of. (Not sure about the polish heath sheep) 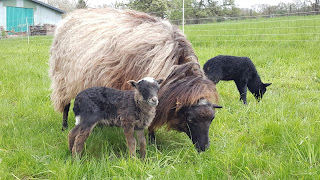 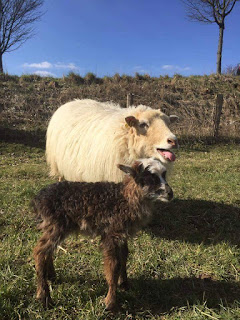 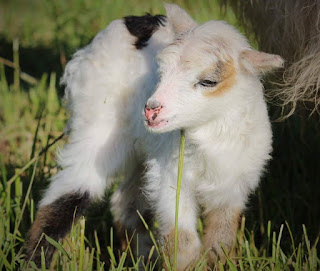 6. Lambs that look very dark can grow into a light adult type. This lamb is by Ralf and a solid nonagouti brown ewe (Ralf carries brown as well) 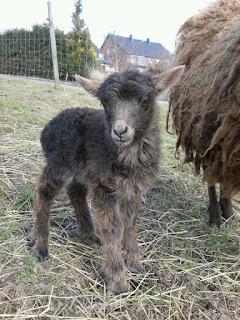 She is the one in the middle of this picture, without horns and looks like pure phaeomelanin. 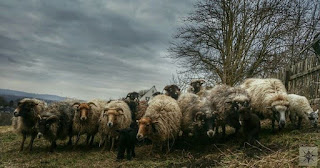 7. Grouflons can produce white offspring with greys and solid coloured sheep!
There might be E-Locus dominant black in the breed but I haven't heard of it. There are a couple of unexpected white lambs from grouflons (including Ralf and TC). Ralf carries spotting so there might be one or two that are just extreme spotting.
Edit: Not absolutely sure about the solid coloured ones. One turned out to be grey on closer inspection, the other one still needs closer inspection.

8. Grouflons can produce offspring that looks like white with strong tan. The tan being presented in a "mouflon" like pattern in a young lamb. Turning into "gold" in a grey-like pattern in adults.


Eclipse could be white with strong tan. Her twin is white without tan. Both parents carry spotting which is supposed to turn off tan in a homozygous animal (but not in the darker grouflon lambs). Does this make Ralf a white sheep?

There are a couple of possible explanations for the "mystery of Ralf":

1. All of them are white! Including Ralf. That would require something else going on to make him look the way he looks! Some extreme form of darkening

2. They are single gene grey mouflons. That theorie works very well on most of the "pedigrees" I have. The "golden" animals could be grey Ag plus grey mouflon Agt making them loose most of the eumelanin and turning golden. It does not explain all of the white lambs. There could be dominant black in some of the ewes and there could be some extreme spotting in some of the lambs.... but that sounds like stuff being brought in to make a theory work..

3. They share some of the colour genetics of gutefar and Romanov. Roger Lundie describes three grey alleles plus a darkening modifier. I'm not too sure about the greys... I need two greys to make this theory fit on my pedigrees. And I need the darkening modifier. And I'm still not sure.... In Skudde sheep we'd have:
At least two greys plus a darkening modifier plus some of the sheep are whites with either strong tan or the darkening modifier. I know of the existence of very strong tan (and a whole range of phenotypically "white with tan" exists in different breeds - see Coburger Fuchs for one example, DNA sequence shows a couple of variants, too) and I have pictures that hint at the existence of the modifier in Skudde sheep. (This modifier is needed to explain "colour" other than reddish yellow phaeomelanin on white sheep).

This lamb is out of two pedigree sheep. Brown and white. It turned into a white sheep (haven't seen pictures so I don't know about the amount of phaeomelanin). This is what I imagine the modifier does on a white sheep... 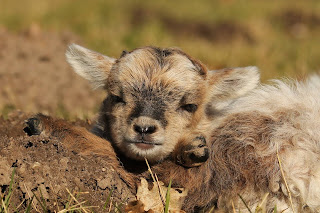 Another example that might be dark modifier on white. Mother is shown, father is white (no picture, I don't know how white he is) 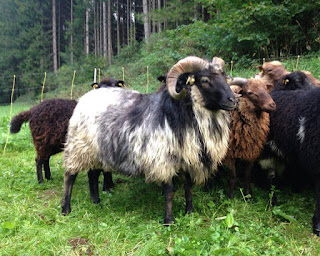 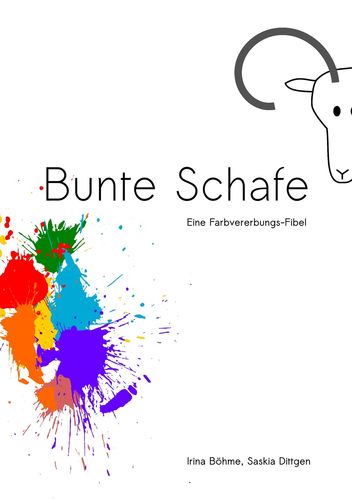